To be, or not to be – an article at The Economist Schumpeter blog

(This article was originally published at The Economist Schumpeter blog – http://www.economist.com/blogs/schumpeter/2013/07/tel-aviv-stock-exchange) 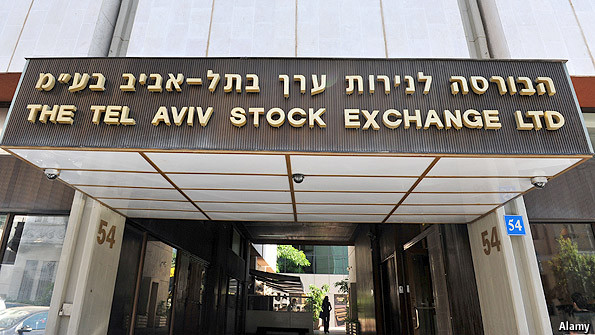 AT THE close of trading on the Tel Aviv Stock Exchange (TASE) last week, the goings-on in its executive suite rivaled the final scene of Hamlet. Saul (“Sam”) Bronfeld, TASE’s chairman, had just fallen on his sword at a board meeting, after delivering a final impassioned diatribe aimed at his nemesis, Shmuel Hauser, chairman of the Israel Securities Authority, whom he accused of executing a “hostile takeover” of TASE.

Mr Bronfeld’s departure capped a dramatic week. It had begun with the resignation of Ester Levanon, TASE’s chief executive officer, continued with the departures of two other senior managers and reached its climax with a letter from Mr Hauser to the TASE board vetoing Mr Bronfeld’s inclusion in the search committee for a new chief executive. The letter also sharply criticised the exchange’s corporate governance—and thus left Mr Bronfeld with little choice but to go.

The issues aired in the course of that fraught week, as well as the tensions and antipathy within TASE and between it and the securities authority, had been building for some time. After working well together for many years—Ms Levanon succeeded Mr Bronfeld as chief executive in June 2006—they seem to have fallen out over how to respond to a sharp decline in trading volumes on the equity market in recent years (see chart). Although bond trading is buoyant, companies have stopped issuing new equity and many firms are being taken private.

Ms Levanon tried to make TASE more attractive, particularly to foreign investors. To this end, she sought to persuade MSCI, a firm that creates and manages indices used by many institutional investors as benchmarks, to include Israel in its index of developed markets in Europe rather than keeping it in a separate category of “Europe and Middle East”, which means that Israel is not on the radar screens of big index funds. MSCI rejected this request in June, seriously weakening Ms Levanon’s standing. Mr Bronfeld, for his part, lays the primary blame for the falling turnover on “exogenous factors”, such as slowing growth at home and a weak global economy and excessive regulation on the part of the securities regulator.

For Rony Halman, one of TASE’s numerous critics in Israel’s financial industry, neither of these approaches addresses what he views as the main problems: an anachronistic ownership structure and bad governance. TASE, Israel’s only securities exchange, is effectively controlled by banks, which run it mainly with their interests in mind, often at the detriment of the wider investment community which is not represented in TASE’s governance bodies. What is more, TASE’s senior executives and its chairman enjoy fat compensation packages and staff is very well looked after.

“Neither management nor owners have made any serious effort to respond to a slump in their business in the way any well-run business should—by seeking to attract new customers”, complains Mr Halman, a partner at Halman-Aldubi, an asset-management firm and chairman of the Israel Association of Pension Funds. He calls for an end of the banks’ control of the exchange by expanding the board of directors to include outside entities, such as the association he heads. “This current shake-up is an opportunity for fundamental changes in the attitude and orientation of TASE.”

Predictably, members of the exchange see things differently. Elah Alkalai, in charge of business development at IBI, an investment firm, wants the new TASE management to tackle the damage done by a wave of regulation in recent years. Tighter rules, she argues, have driven many small financial firms out of business and forced survivors to merge and compete primarily on fees. It has made many large Israeli companies, especially hi-tech ones, prefer New York’s Nasdaq market, which offers an easier registration and reporting regime, as well as many more investors.

To woo them back and revive TASE requires decisive action, not only by the exchange itself, but the finance ministry and the securities regulator, says Ms Alkalai. Alas, this seems unlikely, she deplores: TASE will probably try to muddle through. If Hamlet was not enough to concentrate minds, how about “The Hunger Games”?

Pinchas Landau is an economic and financial analyst, serving as a consultant to major financial institutions in Israel and abroad on domestic and global developments. Read More